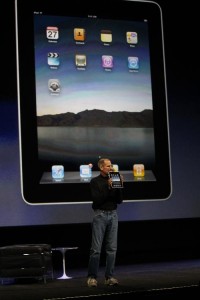 When Steve Jobs presents the world listens. Yesterday he presented Apples latest new product, the iPad at a much anticipated industry event. His presentations are often the high bar to be measured against. His style has changed little over the 20 years I’ve seen him present. I remember watching him present the Apple Newton many years ago at the then yearly MacWorld Boston event.He does have a few advantages over your typical presenter such as he wanted better presentation software, so he had Apple develop Keynote. I’d love to know why they never developed a Windows version. A bigger advantage is that he always has a great, exciting, newsworthy product to show and demo. My favorite memorable “Steve the Presenter” moment was pulling the Apple MacBook air out of a inter-office envelope. He’s part marketing magician.

He makes it look so easy and relaxed, but from what I’ve have read and heard from people that have worked at Apple events he rehearses often and until it looks unrehearsed. He did look a little tired this time, but he still looks like he is recovering from his liver transplant. After what he has been through it is amazing that he has the perseverance to continue to put himself through the new product development, media circus and pressure of a worldwide speaking event.

I’m glad he did. I look forward to his speaking engagements as much as a new Pixar movie, not to mention the excitement of the new product he was launching. I’m sold. I’ll buy one when it ships in a few months.

The iPad may not make much of a dent in the PowerPoint world, but I’ll want to try the new version of Keynote developed for it. You have to listen carefully to the presentation, but it does hook up to a projector so you can present from it.

Now, back to working on a client’s PowerPoint presentation that she would like us to make it look as Apple Keynote “Wow” like as possible.