Watching the keynote. So far after five minutes, I’m unimpressed. One, Steve is not a good speaker – he needs some voice coach training. He sounds like he is shouting to the audience. Two, the intro video was a joke or supposed to be a joke – some guy “thanking technology” had some real important stuff like being able to do a video phone with his grand parents, play network games with some kid, made fun of stupid purchase he made on eBay and a stupid photo he posted on facebook and shared with all his friends (couldn’t do that without technology), but also finished his thank you with “now I have to get back to my 25th game of online scrabble”. I did not think it was funny – kind of saying what a time killer all this wonderful technology can be. 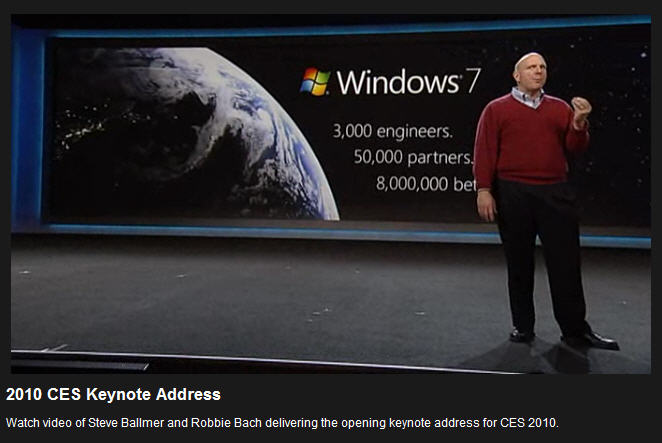 He should have highlighted how really wonderful technology can be and what it has done for the world and what it can do for the world and how Microsoft is at the forefront . . . but let’s see what Steve has to say . . . maybe that is where he is heading. . .
“what we take for granted today, was science fiction 10 years ago” he’s saying. Ok he’s going in the right direction. “Microsoft is empowering people to enrich their lives”. What is project Natal he’s talking about? He’s saying Xbox has changed the landscape of entertainment in the living room. They sold 500 Million games. Now he’s talking about Bing “their decision engine”. I guess that is supposed to be better than Googles “search engine”. Ford is bring the internet to the car dashboard with Microsoft’s sync technology – just what we need more driver distractions. Does it come with a direct link to do a search for a new insurance company to cover you after your next accident?

Windows 7 the biggest accomplishment of the year. Interesting enough, the only place I have Windows 7 running in on my new MacBook Pro. And I’m impressed. It runs well. I’m running the Beta Office 2010 apps on it, and in the past week only froze once.

I wonder how many times he rehearsed this presentation? I also wonder if they are using PowerPoint 2010 to drive the visuals behind him? He says Windows 7 has a 94% customer satisfaction rate – better than the 9.4% they achieved with the Windows Vista operating system.

He just brought out the Sr. Product manger Ryan out to introduce a number of PC’s using Windows 7. He sounds a little Steve Jobs like. He is showing some cool computers. One as thin as three poker chips. Now he is showing us the all important gaming machines. What is more important in this world than some good game computers.

This guy is a better speaker than Ballmer, but no where near as good as Steve Jobs. Now if you a product manger at Microsoft, you need to be a presentation speaker start performer. He is now pretending that h is a student. How cute. He is showing some cool text book software. Maybe technology will transform the sorry state of our educational system.

Yahoo, he’s loading up PowerPoint 2010. He is showing how you can have multiple people at multiple locations work on the same PPT file. The file can merge the changes from both PowerPoint users. This is all too much for me. I have to take a break.

Back. They’re showing Windows PC TV. Some cool stuff, the silverlight technology “the secret souce of TV and Internet integration” says Ballmer. Wonderful, I can record 4 HD shows at the same time. Why would I eve want to do that? Oh, I can now view my DVR content on my ATT phone. Windows TV not for me.

Ahhh, the big announcement: Slate PC’s, the new form factor that will be available this year. They are as portable as a phone, but as powerful as a PC. He says perfect for reading, surfing the web, watching TV. He’s showing the prototype of the HP State PC. It is cool looking. Looks very much like an oversized iPhone. he’s showing the Kindle book windows software.

Here comes Seth again, showing us how important technology has come. It’s supposed to be funny. They need to fire their marketing firm.

Robbie Bach is on stage talking about Entertainment technology. “When technology works the way you want it too, that is the WOW moment”. . . He’s talking about XBOX . . . games that rival real life. . . . sure that is what I need a game that rivals my real life.

They are going to introduce a new Genre of game – the Psychological thriller. And finally the game millions of gamers are waiting for the next Halo. Oh, in respect for the IP being demonstrated onstage they are suspending the media feed. Like no one in the room is recording it and going to upload it to YouTube before the demo is over? They’re back now.

XBOX live. Looks interesting. 20 million people are XBOX members. The numbers sound amazing. Maybe I have to buy an XBOX. Zune Video sounds really interesting too. How retro, they are bringing back all the old arcade classic Artari games. You’ll be able to invite your friends to play in your personal arcade. Once again they are suspending the media feed. I’ll have to check it out on YouTube later. 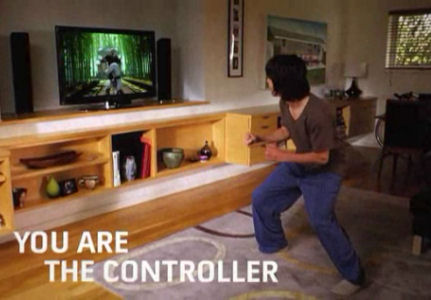 Introducing Project Natal for XBOX 360. From what I can tell is a 3D experience controlled by your body movements? Cool. Movements of your body controls the computer. Very cool. More than 3D. This is amazing. You get to go into your computer. You act the computer understands. “jump in”. I’m in. It will be available “this holiday 2010”. I’m getting on the waiting list now.

Good finish. Robbie was the best speaker of them all, and had the most exciting new product to announce: Project Natal.